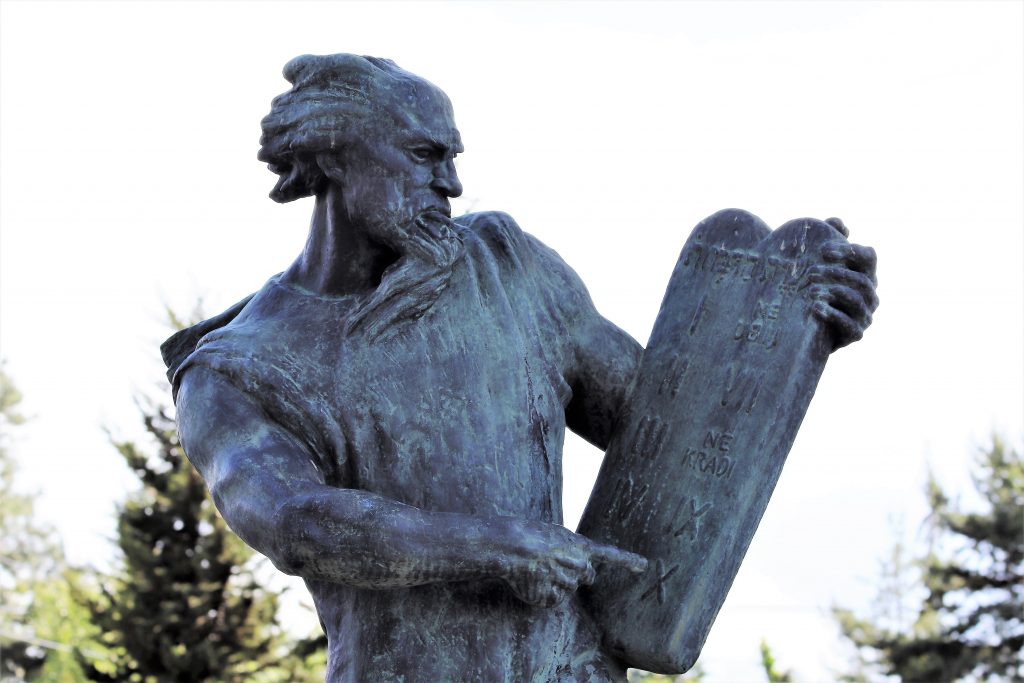 ​”God is the abstraction of an idea by which we orient ourselves to create a functional society.” *

If we accept this definition of God, even if only for the purpose of the intellectual exercise of it, then God is the abstraction of an idea, as opposed to an objective ontological singularity, meaning God is simply whatever idea you have abstracted.
To simplify, God is the representation of the idea, and the idea is one “towards which we orient ourselves to create a functional society.”

So the question is, what is the idea towards which we orient ourselves to create a functional society?

The point of this exercise is to ask, What idea do we have that we think is the thing that creates a functional society?

Now let’s transition to a more traditional view of God ​in which ​God is the Creator/Designer. If the only means by which people will behave in a manner that respects others and their property is by the use of coercion to force the behavior, we can conclude that God made people to be selfish, abusive, compulsive, and non-adaptive socially, or that God allows a corruption of the design to persist without doing anything to remedy the issue. In the first possibility then, God is stupid and impotent and poor at designing socially functional human beings. In the second possibility, God is negligent, or perhaps ignorant that there’s a problem.

A third possibility arises, which is that law is not actually the means by which we create a functional society, and that the paradigm of intrinsic “evil”,”total depravity”, “adamic nature”,  or “original sin” is incorrect. God can have an escape from the logical conclusion of being stupid, impotent, ignorant, negligent, and inept if the paradigm that people need to be coerced to act in a socially adaptive manner isn’t accurate.

What if the lack of adaptivity people have is programmed in by the blasphemous exaltation of the idol of law to the status of god?

What if we even had a story to reference to see what that looks like?

Think about why it might be that the commandments were given on lifeless, cold, heavy, burdensome, inflexible, non-adaptive, unrevisable stones. Think about irony of how the commandment on a graven image of stone says not to bow down to graven images of stone. Think of the irony that the ark of the covenant was a coffin carried about by pallbearers. They carried around their tiny, dead, lifeless, burdensome, heavy, graven image god in a box, instead of burying it in the ground where dead things belong.

What if the idea towards which we orient ourselves to create a functional society is love, and not law? What if this is the New Testament message? What if love one another instead of judge one another’s adherence to the idol god law was what it meant to be delivered?

If the name of Jesus is “God is salvation” then could we interpret that to “believe on His name” is to believe in a God who IS salvation? What if it has absolutely nothing to do with believing that a person “named” Jesus, who was a roving prophet, was the singular and uniquely god-man to have ever existed, and the message was to believe that YOU are the uniquely beloved son of God?

What if the LIFE and MINISTRY of Jesus was more important than the death, burial, and resurrection of Jesus as the satanic penal substitutionary atonement theory has taught? This atonement theory is based upon having an idolatrous impotent, stupid, ignorant, absent, negligent, law god who lacks the creativity to influence people to act in a socially adaptive manner without the use of violence and coercion. It’s based upon a view of human beings as intrinsically evil. It’s based upon a notion that utopia is achieved by ridding society of all the wrongdoers. (Sound anything like the standard notion of heaven?)

The story shows us that no utopia was achieved by alienating and exterminating the “wrongdoers.” Instead, what was created was a callous, cruel, non-adaptive, inflexible, legalistic, hypocritical, fake, phony, achievement oriented society that blamed the victims for being victims, and that killed the one who professed a message that said, you are all gods, so love and worship one another.

He made an open showing that the “god” they had did not create a functional society, but rather a cruel and bloodthirsty one. The ultimate demonstration of this was at a cross, where the hearts and intents of those who worshiped an idolatrous law god was exposed for all to see. The law is the ministration of condemnation and of death. It is the covenant with hell that is made void by the reorienting of the focus from law to love. To “repent” is to abandon the idol shepherd of law, and to shut out the voice of the stranger hireling that says not to hear and follow the still small voice of the spirit within.

If we orient ourselves towards love as the means to create a functional society then love is God, and love finds a way to influence change without force, without coercion, without violence,without violating another’s will or dignity or property. Love continues in creativity, and finds new solutions rather than stifling itself to non-adaptive law prescriptions.

Love changes the intents of the heart by breaking the programming that makes a god of law.

That is the Gospel of grace.

*Quote by Dr. Michael W. Jones may be subject to copyright prohibitions.

All images on this site are in the public domain CC0 No rights reserved, and originate from Pixabay.com unless otherwise specified.

This work is licensed under a Creative Commons Attribution 4.0 International License.
This is a Free Culture License!
Go to top